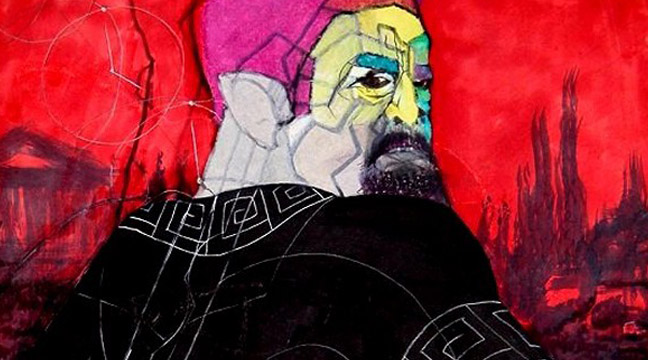 Loren Hall is an American artist well known for his natural process painting often depicting unusual  but nature-like abstract forms. Loren enjoys creating artwork using techniques he developed on his own. He shared how this was done last year in his article An Artist’s Life…?

I was delighted to have a conversation with him to learn more about his journey as an artist, inspiration behind his work and the new direction he is taking with his creative endeavors.

I’m intrigued by your deep interest of wanting to develop your own painting technique and style. Why do you think this is important for your work?

I gleaned very early in life that if I were ever going to be able to make a living as an artist, I was going to have to stand out, and find a voice that didn’t sound like anyone else’s ever had. Everyone is unique, why shouldn’t everyone have a unique voice? The trick is to find it, and that was the goal I set out to achieve.

I’m not saying I’ve 100% reached that goal, but that was my motivation at the time: survival.

I wonder if you have a routine in your creative process. How do you get in gear to start painting?

I have often wished I could be the type of artist whose emotional state was more in-tune with their creative process, like an abstract expressionist, but being angry, sad, frustrated, or even joyful or exuberant, was detrimental to the work I was producing. I was much more like a plodding, diligent farmer, and in order to plow my field I must systematically remove the rocks and roots from the path of my plow.

That meant that I had to take practical measures such as taking the weather into account because I worked outside, and having a completely level work surface, but also meant that I had to filter out a lot of emotional and intellectual “noise” which might interfere with my ability to know what my painting needed — in the same way that a farmer must know how much water and fertilizer his crops need.

I need to get in the proper frame of mind so that I can focus, and music, meditation, and mindfulness are a few ways that I can do that.

Your work has evolved tremendously as a result of 20 years of learning, experimenting and building. You’ve also discovered a new art technique called GAN art whereby AI technology is used to produce art. How does GAN art differ from traditional painting?

The main difference is that an AI is responsible for making many design & compositional choices, rather than the artist directly. However, that AI makes those choices based on images that it was trained on — in my case my artwork — and strives to make work that is as similar as possible to the work of the original creator.

What is surprising to me (and quite frankly the format’s saving grace), is the similarities between GAN art and traditional painting. When I create in pigment and gesso, I am always surprised by the results. I can “persuade” the imagery, I can “cajole” it, I can “encourage” it — but I cannot “dictate” it, or even predict it. I must forge a relationship of understanding — a compromise with the chaos.

The same is true of GAN images. Nearly every generated image is a wonderful surprise, but very often requires an eye for imagery that is partially obscured by a need for post-processing. You must be able to tell that something is there, before you can flip, mirror, crop, or rotate the image in order to bring it out.

So in that way I am, again, forging a relationship with the medium based on mutual understanding, in a similar way to what I’ve seen in my non-digital works. The action is the same, though the mechanics differ.

I absolutely love both ways of working, but if I had to choose, it would be traditional painting because it’s more of a direct relationship between artist and medium, and therefore infinitely more rewarding. …If not easier, faster, more forgiving or affordable.

Are there any particular artwork that you’ve created that you are most proud of and why?

I’m proud of the first time I ever decided to pick up a marking tool and a work surface, even though that “work surface” was likely a wall at my parent’s house. I don’t know when that was, or what I created, but it set me off on the path of a lifetime.

In addition to that important first step, I think I’m probably most proud of two works, for two different reasons: The first one is titled “Self Portrait in Backward Time” from 1994. I’m not generally good at rendering myself, and I didn’t intentionally say a lot of the things that I wound up saying in it, so having a portrait that I was satisfied with that left me feeling fulfilled was a double-victory for me.

The second is the first natural process painting I ever made, in 1993, and it’s called “Encephalopod”. It’s not that I’m particularly pleased with the resulting image, although I’m certainly not ashamed of it, but it’s important to me because it represents my ability to make sound decisions on rare occasion, and my bravery to undertake a leap of faith. That leap has taken me far, and continues to.

Today I’m proud each time I find the resolve and the resources to paint, or to create art in any form at all. It takes a lot more than it once did, on multiple levels, and it’s just as vital as it ever was — maybe even more so!

What do you find are some of the best things about being an artist?

I think my favorite things are my autonomy and “authority”. Nobody can tell me to work in a different way, or tell me I’m working incorrectly. It is up to me, like nothing else in my life could ever hope to be — no matter how much I strive to make it my own.

They can tell you they don’t like your way of painting, but that’s something entirely different.

I very much like that you included this question at the end of this, because to me it ties in really well with the first question. I think my response to this goes back to one of the reasons why I’ve been striving to develop my own personal style and technique.

What’s next on the horizon for you? Anything you can let us in on?

I plan to continue trying to remain active and engaged creatively, and to continue to embrace any and every opportunity which presents itself, within reason. I mentioned Georgia O’Keefe in this once, and I’ll do it again now. ‘Not squandering opportunities that the universe throws at you’, is a lesson I learned from her.

I also plan to try and act as a force of inspiration for other creative people who might have lost focus, lost direction, or lost hope.

Be sure to follow Loren on Twitter and check out more of his amazing work on Patreon.